I recently caught up with “All That Is Solid Melts Into Air,” an exhibit of paintings by Jane Dickson which bring to life the Times Square of the old sleazy era in the 80s and 90s. Her style is her own but its impact reminds me of Edward Hopper’s, evoked primarily through urban night scenes; as in Hopper’s works, deserted streets and places have a loneliness that’s not entirely sad, but also thoughtful, introspective, almost peaceful, and sometimes even inviting—as in this picture of a guy with a placard for a club called Dreams (I vaguely remember that club’s name, although I don’t remember if I ever went there)… 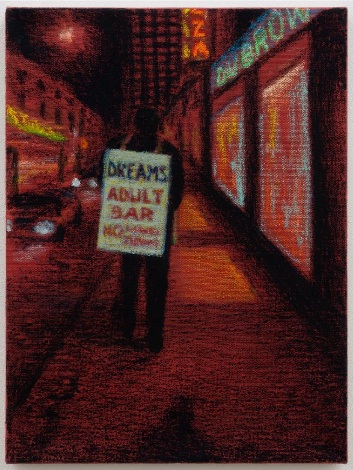 Dickson’s paintings in this excellent show at the James Fuentes Gallery on NYC’s Lower East Side (on display through February 17, 2019) feature a woman’s face looking through noirish Venetian blinds; a boy at a bus stop in an ominously red full face mask; a girl dancing in peep show with a customer on the other side (we get the peep show’s window eye view)…

There’s a painting of a low angle on a woman navigating a baby stroller down a stairs; the front of the big Peepland that was situated mid-block on the south side of 42nd between 7th and 8th Avenues; cops running on the street in some kind of frenzied police action; an evocation of the Terminal Bar that used to be (if I recall correctly) at 40th and 8th Avenue; and my favorite painting, showing a long hallway leading to the “employees only” area of a strip club, with a solitary half-naked dancer, almost out of eye view, leaning against the wall–you can almost imagine the rasping sound the linoleum would make beneath her high heels…

The colors of Dickson’s paintings and their varying sizes suggest indirectly a complex mix of personal emotions, those of the painter or (more vaguely) of the subjects of the pictures, just as Hopper paintings do for their era. One painting I also particularly liked, and one of the largest, was a vertiginous angle on the stairway/escalator leading downstairs in the old Nathan’s Hot Dogs that used to be at 43rd and Broadway…

I went down that stairway many a time to eat a frank in the forlorn expanse of the lower level dining room (I lived in Times Square myself in the 80s, only a few blocks up).  This painting in particular reminds me how the old raunchy neighborhood (I never called it “The Deuce” myself back in the day) might have made you feel lonely, or was a place you went to hang out when you were already feeling lonely (or horny); but it didn’t necessarily make you feel ashamed of being lonely (or horny), as the new overly technological tourist-filled Disneyesque miasma of 21st century Times Square does for me. Once you were allowed to sit in your solitude in Times Square, perhaps feeling forsaken but not defective for not having a wife or family in tow; knowing that you could find distraction only steps away in any number of strip clubs or peep shows or in library-like adult bookstores where you could stand wordlessly side-by-side with other strangers and browse through assemblages of erotica that sometimes, depending on the particular store, could appear to the scholarly-minded almost Smithsonian in their range. After all, it was in places like this that I found rare mint copies of the original John Willie BIZARRE magazines from the 1940s, at prices so low it was clear the merchants had no idea of the value of what they were selling.

So if you have a casual interest, a deep nostalgia, or a fascinated yearning for the bygone Times Square depicted in HBO’s series The Deuce (see my own thoughts on the show here), check out Jane Dickson’s beautifully evocative paintings at the James Fuentes Gallery, located at 55 Delancey Street. Here is a link to more info, and another link to an interview with Ms. Dickson and a preview of the paintings. Also check out this interview by Ben Yakas in The Gothamist on the occasion of the publication of her book of street photography and art, Jane Dickson in Times Square, which you can find on Amazon here.

Postscript: It’s funny, but I just realized, in looking this over as I was editing, that my selection of the pictures to illustrate this review really evokes a typical night for me back in the 80s or early 90s. I didn’t assemble the pictures consciously with this in mind, but studying them now I see how they match the pattern of my many lively lonely travels through Times Square. Seeing a guy advertising a club, I might have gone to the venue, or maybe first to a peep show, then to the club; later, in the strip joint and having had a few beers, I would invariably head to the men’s room and might well have seen a dancer having a cigarette back near an “Employees Only” area; and finally, having had my raunchy fun at the club (or even been disappointed, as could frequently happen), I’d stop at Nathan’s for a hot dog and Coke…a meal that could be lonely, yes, but also satisfying in a quasi-Romantic “I’m a lone wolf” kinda way…  😉 You know, “lone wolf” as in David Janssen in the great old 60s tv series The Fugitive? Except that I was probably just running away from having to spend too much time alone with myself…

All examples of the paintings shown here are by Jane Dickson, as displayed at the James Fuentes Gallery NYC January 16 through February 17, 2019.

Upstairs, "one-on-one" booths where girls would entertain you behind glass for $1 per minute.

I got the above image from an article at the Gothamist website, where you can see several more great glimpses of the bygone glories of NY sleazitude. And go to a site called Bald Punk’s Paranormal NYC to see a funky video that gives you a nice feeling of Times Square in the 70s.

I knew most of the theaters, peep shows, bookstores, and strip clubs in the area. That’s what the area is missing today–places where men who enjoy the solitary culture of sleazitude can get their thrills cheaply, unpretentiously. I love the Internet, but sometimes you like to be alone amongst liked-minded strangers.

I remember the walk-in $10 massage parlors–the door was a curtain of beads, or sometimes there was no door at all–down on 42nd Street between 9th and 10th Avenues, which is now “Theater Row.” Girls would be sitting on folding chairs in loose summer frocks. “Hi, honey, wanna massage?” “Yes, ma’am!”

I got the above shot from a site called NYC Architecture. Go there for more amazing pix of the area, and edgy photos of ladies on the streets.

Now, do you remember the shoes that were so popular in the late 70s, Candies slides? Whenever I see pictures of them, I think of a girl I knew back in 1977 in an incall brothel apartment on the East Side in the 50s.

I can still see her butt, plumped up when she was standing in this brand of heels.

Not too long after I got back to New York following my father’s death that summer in Chicago (my hometown), I found this cute girl through an ad in Screw newspaper and visited her for six months for $25 a session. Although she was comparatively short, she had really nice legs and a round butt, and she often wore pantyhose which sexily accentuated her curvy shape. And she also always wore Candies’ slides, the same style as these vintage ones from 1978 that I found in this photo from the Esty site here.

She was one  of the first girls I ever got into femdom scenarios with, even though all I basically did was kiss her legs, feet, and butt. She was a friendly little blonde Jewish gal in her early 20s from Queens. She never worked on Friday nights, because that’s when she had Sabbath dinner with her relatives. At least that’s what she told me, and I liked the idea of it so I believed her. Maybe it was true, or maybe she was playing me because I was then, still, a “nice” Jewish boy. Even if she was playing me, it doesn’t matter, because it was the right myth to please me at that time.

She got me through a lot of lonely months with nice conversation and roleplay when I was still thinking a lot about how awfully my father suffered (a quick, catastrophic neurological disease), and how young he died (forty-nine). Eventually I started thinking it would be nice to see her on the outside, but although she didn’t mind me calling her at the brothel just to say hello, dating wasn’t possible. Ruefully I said, “I wish I’d met you in a different place, like in a museum, coming up to you and giving you some corny line.” I usually tried to pick girls up at the Metropolitan Museum in front of the Dutch paintings, which in their homey humanism lent themselves readily to quips. “Yeah, that would’ve been different,” she said. But that wasn’t how we’d met, so we just continued as “trick and tart” until eventually I couldn’t seem get through to her anymore at the whorehouse just to say hello.

For a long time I liked to think it was like something out of the poem by Andrew Marvell, The Definition of Love:

Therefore the love which us doth bind,
But Fate so enviously debars,
Is the conjunction of the mind,
And opposition of the stars.

I was a romantic fool then. Still have a touch of it today.

She called herself Kitty, and when I first saw her, she was sitting scrunched up in the corner of a couch, just like a kitten. “Who would you like?” the madam said. So I nodded to the kitten in Candies.