“KNOW WHERE YOU BELONG”…stern beauties help their slaves to never forget! 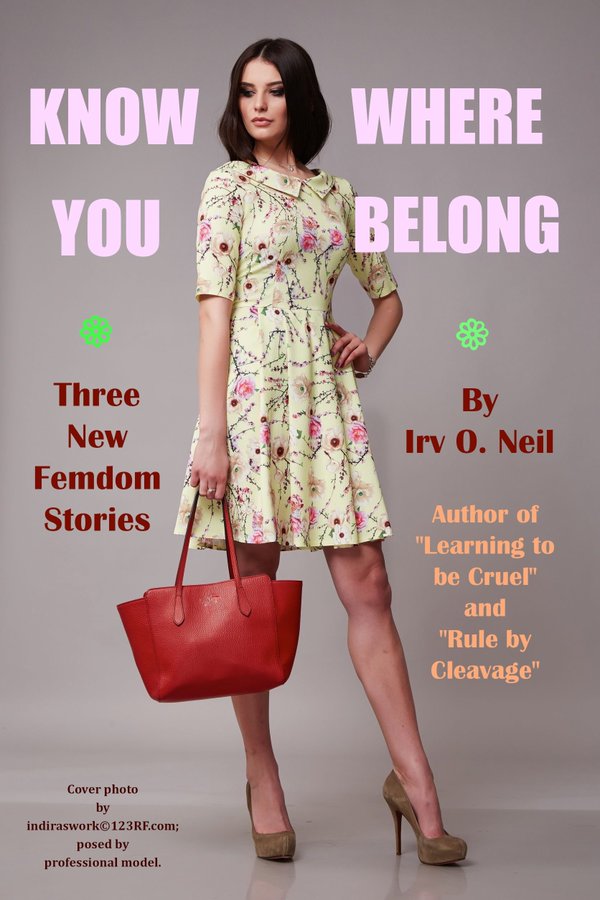 You can read more about it here!

Available at Amazon Kindle stores worldwide. Read it on your phones, tablets, computers and Kindles.

It may have inspired someone to also pick up a copy of my earlier collection of short stories, SPELL OF DOMINANCE, here.

Posted by irvoneil on July 25, 2019 in Amazon.com, ebooks, Erotica, Kindle

Submit and be HUMBLED BY A BRAT!

HUMBLED BY A BRAT

How could he NOT look at such a splendid display of cleavage?

It’s been several months since I last published a new story on Kindle, but I just put one up this evening which should be available tomorrow, Wednesday 4/17/13, on all the Amazon sites. Just click on the sidebar where it says “My ebooks” and you’ll see all my stories.

Would you like to be in the clutches of these two dolls?

I wish I could draw better, but this crazy cover definitely captures the bizarre, horny, and unpredictable atmosphere of my story, which has everything from tittie bars to foot worship to relentless spanking to the fervent appreciation of the feminine fanny. Leo, an unemployed middle-aged man, meets Orchid, a young Chinese-American stripper, and she takes him home to her apartment. (Okay, so my hero is yet another lucky subbie! Well, Zane Grey wrote about cowboys a lot.) Leo thinks (or hopes) he’s going to have a session of foot worship with Orchid, but he’s in for a big surprise when he meets her sister Lily…a hard-working research scientist with some kinks of her own…

I’ve priced the story at 99¢ so you’re just a click away from instant erotica pleasure! It’s formatted for everything from iPads to Kindles to iPhones and of course for the free Kindle computer apps.

Re the art work, this cover is a little different than my previous ones. The earlier ones are a little more sedate, but this time I used some oil pastel crayons and an ordinary black pen and I started fooling around with the picture. I was actually going to throw it away just before I took out the crayons, but then it started coming to life for me and, as I said, capturing the atmosphere of the story. Maybe you don’t agree and think I should have thrown it out?

When I’m under a lot of stress I find that drawing is a nice emotional release. There’s something cathartic about running thick swatches of pastel across a page, pure color.

As I’ve said elsewhere on various occasions, I’m very much an aficionado of visual art, and I envy artists their immediate impact on the spectator, especially in these days when people seem to read less and less. But YOU don’t read less and less, and I hope you’ll check out DOMINANT CHINESE TWINS ENSLAVE WHINY MAN!

UPDATE: The book is now up on Amazon US & India here! And look for it at Amazon UK, Amazon Germany, Amazon France, Amazon Spain, Amazon Italy, Amazon Japan, Amazon Brazil, and Amazon Canada too!