Happy 2016 to all my readers! A safe and healthy new year to you all!

A few days ago I blogged about one of my two newest ebooks, THE SINS OF DR. JEKYLL. Today I’d like to tell you about…

IN TRANCE FOR A TRAMP…

Wherein my submissive hero Timmy experiences an incredible night of deep and lasting degradation! (Which he can’t resist and he deeply enjoys…) 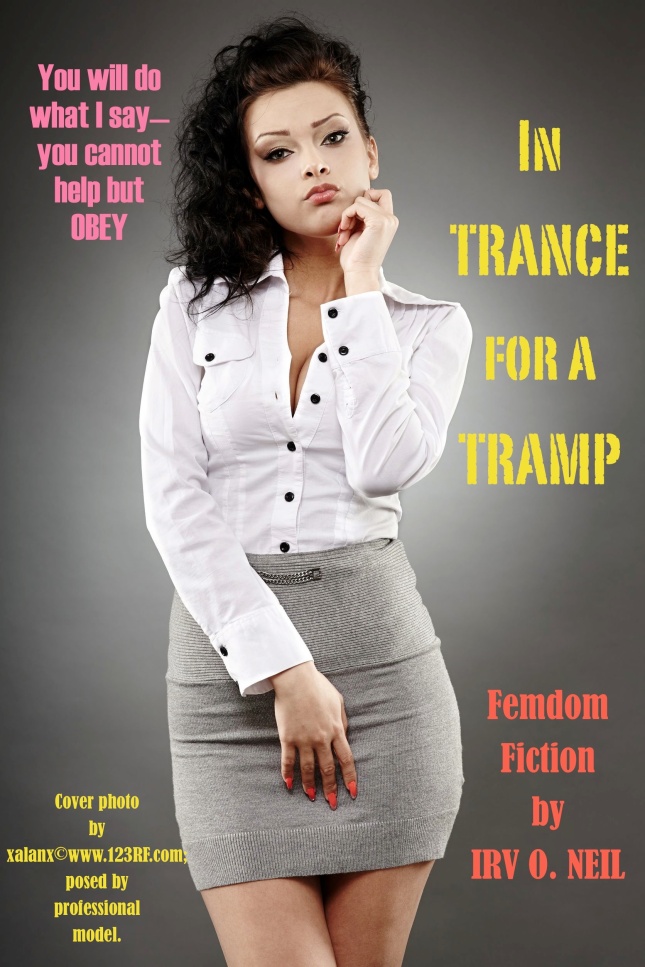 Do you like the cover? This girl really looks like trouble, doesn’t she? I am very fond of 1950s paperback books, with their femme fatale cover girls, and this model projects that same spirit. The image, which I found at a stock photography house, was shot by “xalanx” whose portfolio you can see here. I also used one of his images for the cover of RULE BY CLEAVAGE (read about that book here).

Getting back to the noir paperback aspects, even the typeface I selected for the title is similar to what was sometimes used on the covers of the noir paperbacks, stories crammed with mean, manipulative ladies.

And my dominant heroine, Theresa Pendillac, is very mean and manipulative. She toys with shy Timmy, a fellow worker in her office, and when she finally goes on a date with him, it turns out to be only a pretext for an evening of sexual humiliation involving everything from foot worship to cuckolding to pantyhose sniffing to…well, suffice to say, Timmy realizes something about himself that he didn’t know until Theresa brings out Timmy’s deeply buried desires.

One reader named wylde64 enjoyed this story so much that he started riffing with me on Twitter about what could happen in a sequel. The possibilities are many. I’m not big on writing sequels (Learning to be Cruel Part 2 was the rare exception) but maybe I will consider it depending on how big a response I get to IN TRANCE FOR A TRAMP. Learning to be Cruel, for example, has been my bestselling title ever, so I did write a sequel…and you can read here about the unique way that came about.

I reprinted IN TRANCE FOR A TRAMP with only with a few minor adjustments. I kept it in the same time period, 1996, but I tweaked the names a little (Timmy is called Jimmy in the original) and I wrote an introductory scene so that I could use the new photo cover that I’d selected for the ebook. There was something about the way the model rests her hand on the front of her skirt that seemed like something the Theresa of my imagination would do, so it was a pleasure to describe her using that teasing gesture in the office where she and Timmy work.

I also altered the original title from the blander “The Trance” (okay for a magazine, but not for the Internet) because I felt it needed more strength to compete in the ebook market. To do this I emphasized the femme fatal-ish qualities of Theresa as a “tramp” right out of noir fiction, up to no good with ruthless vixenish ways paired with a remorseless voracious vagina.

IN TRANCE FOR A TRAMP is available at Amazon US and at the Amazon stores worldwide, ready to read on your Kindles, phones, and tablets.

I hope you’ll make a firm “resolution” to check it out as you begin a most Happy New Year!

The original art from “The Trance” is ©Sardax and used with his permission.

This site uses Akismet to reduce spam. Learn how your comment data is processed.