Sorry I haven’t posted in three weeks! March is always a very busy month, what with preparing my income taxes as a freelance writer and other work-related stuff. When I manage to get away from the computer and the thousands of words of weekly copy I do for the adult websites at the DDF Network, writing about mouthwateringly beautiful girls like Katarina from the Czech Republic, who’s one of my all-time favorite models…check her out here on DDFBusty.com…

…I try to relax a little, reading about temptresses and femmes fatale in some of the vintage paperbacks I find at flea markets, or looking at the glorious models of yesteryear in classic girlie mags from the 1950s and 1960s. 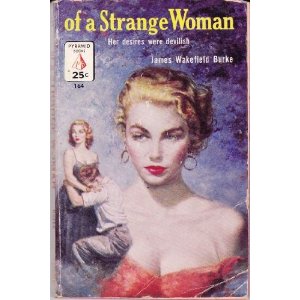 Covergirl Shirley Quimby was popular in the early 60s…which is easy to understand!

But I’m starting off April with a bang. Another story will be posted at BestLegShow.com, so check out the site with all the fantastic photos and videos done by leg photographer extraordinaire Jana Krenova here, and look for my fiction in the Stories section.

Dr Sue is an insightful interviewer and the fans call in with some provocative questions!

Be sure to visit the chatroom or call in with your thoughts about sex writing and our stories in particular. Just click here for more info! Look forward to hearing from you on the show!

Hope you’ve been enjoying your weekend. After a Friday of rain and wet snow, we here in NYC got a beautiful sunny and almost spring-like Saturday and Sunday. What a pleasure to walk around and check out the flea market with a friend… 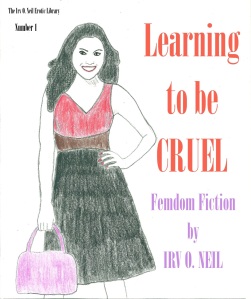 After almost 2 years this remains my top seller!

This sequel is one of the craziest stories of my twisted career!

You can leave them anonymously on this blog or in a review on Amazon! I hope you’re enjoying the adventures of my submissive hero Lester as he tangles with Miss Meirong, the cruel and inventive Chinese-American goddess of his dreams. As ever, you can find the books in the Kindle department of the Amazon stores in the U.S., UK, Japan, Germany, Italy, France, Spain, Canada, and Brazil. Just click to the right under the bookmark “My ebooks” to be taken to the U.S. Kindle store.

The narrator of Venus in Furs tends to his mistress at her bath…her whip nearby!

I urge you to check it out! Go to Amazon here to check out a sample of the book and read my full review.

Now one thing I enjoy doing is reporting to you readers all over the world about the kinky coverage that appears regularly in the New York Post. First last Thursday 3/1/13 we got an amazing leg shot of Selena Gomez, Justin Bieber’s ex-girlfriend…

Those are indeed impressive pins. Fill me with vim and vigor!

Then on the same day we got a story about that actress from Game of Thrones doing a nude scene on Broadway. I liked one of the theatergoers’ comments: “I would drink Emilia Clarke’s bathwater.” I frequently use that expression myself as a way of denoting my admiration of a lady’s charms…I wonder if I could actually ever do such a thing. Never say never, I guess… 😉

I’ve never watched Game of Thrones but I know some people swear by it.

Finally today in the Post we got a story about a girl’s adventures serving up her feet at a foot fetish party. The photographer for the story got a very nice toe cleavage shot… 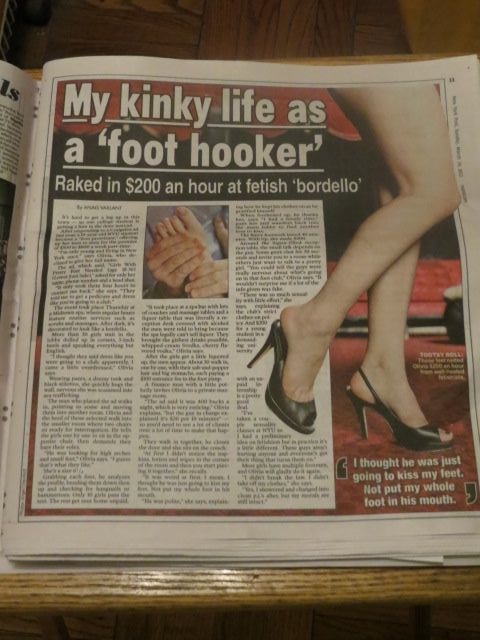 Nice toe cleavage on the right footsie…but nails should have been polished a color in small shot!!

You can read the full story here.

I knew a topless dancer from Europe here in NYC who was thinking of trying this as a way to make extra money. She had nice legs and feet, and I’d known her for about a year as a customer, and I said, “Hey, I’ll worship your feet.” She knew I liked femdom but she wasn’t very good at roleplaying; it wasn’t her thing, so she just generally gave me a pretty vanilla dance with no bossy mistress-like chatter. When it came to the foot parties, though, she seemed more inclined to the idea of letting total strangers do it instead, and it never happened between us. Maybe she thought I just wanted a freebie, but I would have been willing to pay her just like the guys at those foot parties. Except I would have felt more comfortable doing it with her in private, rather than as one of a line of gents glomming onto her heels and soles. No matter how much the feet are wiped off between “sessions” at a party, I wouldn’t be able to erase the images of the joes who’d been drooling on a girl’s toes right before me…

In any case, after that, I lost track of her until about a year later when I ran into her at a totally different club. I didn’t ask her about the foot fetish parties; I don’t know if she ever did them; and if she did, I wasn’t interested in what she did with her insteps with other people. I guess I was hurt that she didn’t want me to worship her legs and feet…that after visiting her in the club for so long, I wasn’t her go-to choice for a toe slave!   😦